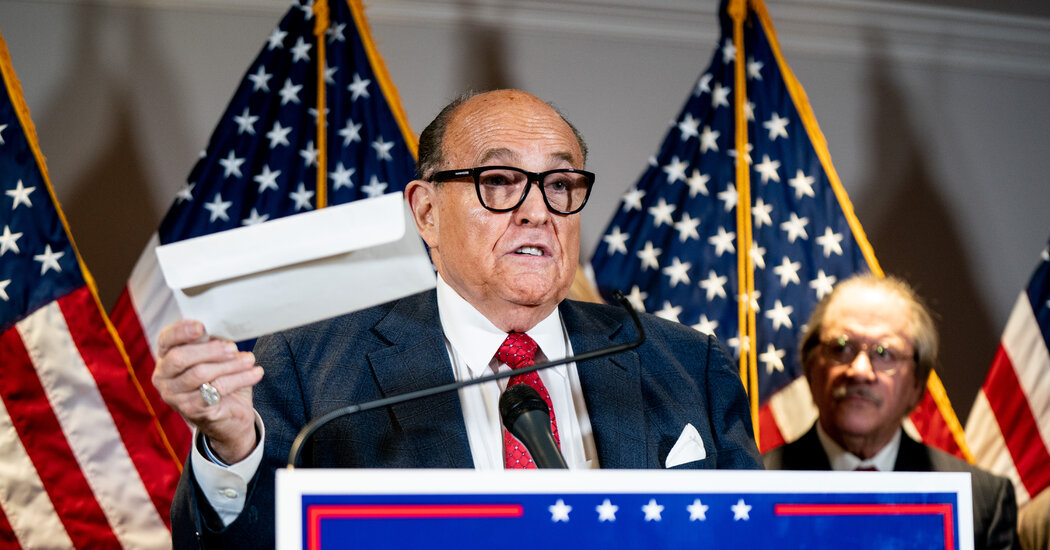 WASHINGTON — The Trump administration imposed sanctions on Monday against seven Ukrainians — including two who assisted President Trump’s personal lawyer Rudolph W. Giuliani — for being part of what it called “a Russia-linked foreign influence network” that spread “fraudulent and unsubstantiated allegations” about President-elect Joseph R. Biden Jr. during the 2020 campaign.

Mr. Giuliani relied on two of the Ukrainians who were penalized — Andrii Telizhenko and Kostiantyn H. Kulyk — as he sought to gather damaging information and force government investigations into Mr. Biden and his son, Hunter Biden, related to Ukraine. That effort, which had the president’s backing, led to Mr. Trump’s impeachment in 2019 by the House of Representatives.

The sanctions announced on Monday stemmed from the Ukrainians’ work with Andriy Derkach, a member of the Ukrainian Parliament, who was the target of sanctions by the Treasury Department last year and was accused of being a Russian agent and spreading disinformation about Mr. Biden. Mr. Derkach had met with Mr. Giuliani in 2019.

The Ukrainians penalized on Monday were accused in a statement released by the Treasury Department of helping Mr. Derkach “spread misleading and unsubstantiated allegations that current and former U.S. officials engaged in corruption, money laundering and unlawful political influence in Ukraine.”

The targets of the sanctions also included four media companies that the Treasury Department said were affiliated with Mr. Derkach and were involved in his efforts to spread disinformation.

The sanctions are the latest in a series of steps taken by the Treasury Department over the past few years to punish people and groups that it accused of involvement in Russia-linked election interference, even as Mr. Trump, an intended beneficiary of the interference, has continued to downplay Russia’s role.

“Russian disinformation campaigns targeting American citizens are a threat to our democracy,” Steven T. Mnuchin, the Treasury secretary, said in the statement. “The United States will continue to aggressively defend the integrity of our election systems and processes.”

Mr. Kulyk had worked in the office of Ukraine’s national prosecutor, where he helped lead an investigation into a Ukrainian oligarch who owned a gas company that had paid Hunter Biden as a board member when his father was serving as vice president and overseeing American relations with Ukraine. Mr. Kulyk discussed the subject with Mr. Giuliani, who was pushing the Ukrainian government to announce an investigation into the Bidens to damage the former vice president’s presidential campaign.

Mr. Kulyk, who has since been fired from the prosecutors’ office, was accused by the Treasury Department on Monday of forming “an alliance with Derkach to spread false accusations of international corruption.”

Mr. Telizhenko, a political consultant and former official in the Ukrainian Embassy in Washington, provided information to Senate Republicans for a report on the Bidens’ work in Ukraine, which was released weeks before Election Day in an apparent effort to damage the Biden campaign. The report found no evidence of improper influence or wrongdoing by the former vice president.

Mr. Telizhenko assisted Mr. Giuliani during the 2020 campaign, arranging meetings with Ukrainians claiming to have damaging information about the Bidens. Mr. Telizhenko helped plan a trip for Mr. Giuliani to Kyiv, the Ukrainian capital, in December 2019, during which Mr. Giuliani met with Mr. Derkach and recorded interviews with him and others that aired on Mr. Giuliani’s podcast and a special on the pro-Trump cable channel One America News Network.

The Treasury Department seemed to allude to this trip in explaining its sanctions of Mr. Telizhenko, noting in its statement that he “orchestrated meetings between Derkach and U.S. persons to help propagate false claims concerning corruption in Ukraine.” The statement did not explicitly name Mr. Giuliani or the Bidens, but it asserted that the sanctioned Ukrainians “leveraged U.S. media, U.S.-based social media platforms and influential U.S. persons” in their efforts to spread damaging allegations.

”I will continue to fight for the truth no matter what lies are spread against me, as God is where the truth is,” Mr. Telizhenko said in an emailed statement on Monday. “I stood and will stand with President Donald J. Trump.”

Mr. Giuliani did not respond to a request for comment on Monday.

After the sanctions against Mr. Derkach were announced in September, Mr. Giuliani said in an interview that he “didn’t do much investigation” of Mr. Derkach but had “no reason to believe he is a Russian agent.”

In the interview, Mr. Giuliani said he knew Mr. Telizhenko “a lot better than I know Derkach,” adding he “looked into” Mr. Telizhenko “very carefully. I mean, look, I’m not a genius, but I would be shocked if he’s anything like a Russian agent.” He added: “I would vouch for very few Ukrainians. I’d come pretty close to vouching for him. I’m not sure I would completely vouch for him, but pretty close.”

The sanctions against Mr. Derkach stemmed from his release of audio recordings of Mr. Biden talking to Petro O. Poroshenko, the former president of Ukraine. Mr. Trump promoted some of the material released by Mr. Derkach, who claimed the recordings revealed corruption, though the conversations were mostly unremarkable.

Other Ukrainians targeted on Monday were accused of assisting in the efforts related to the recordings.

Oleksandr Onyshchenko, a former Ukrainian lawmaker and ally of Mr. Poroshenko, was accused by the Treasury Department of providing the recordings to Mr. Derkach. Mr. Onyshchenko fled Ukraine in 2016 after being accused of fraud and money laundering.

Secretary of State Mike Pompeo said in a statement on Monday that the Ukrainian officials facing sanctions “have made repeated public statements advancing malicious narratives that U.S. government officials have engaged in corrupt dealings in Ukraine.” He added, “These efforts and narratives are consistent with or in support of Derkach’s objectives to influence the 2020 U.S. presidential election.”

Two of the media companies that were punished — including NabuLeaks, which posted the recordings of Mr. Biden and Mr. Poroshenko — are owned or controlled by Mr. Derkach. The other two, Only News and Skeptik TOV, are owned by Mr. Derkach’s media manager Petro Zhuravel, who was also penalized by the Treasury Department on Monday.

A number of Mr. Derkach’s allies were also targeted. They include Dmytro Kovalchuk, a member of his media team, and Anton Simonenko, a close associate who helped Mr. Derkach hide financial assets, according to the Treasury Department.